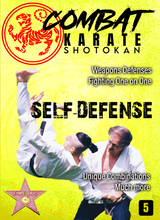 Sensei Emil Farkas is an internationally recognized authority on the martial arts. He holds an 8th dan in Shotokan karate and has been teaching this art for over 55 years. He has trained under some of karate's greatest masters including Masatoshi Nakayama and is considered one of the worlds leading experts on realistic street effective self defense. He has worked as a bodyguard in Hollywood for 10 years so he knows what works on the street. He developed Combat Shotokan over 30 years ago specifically to give his students the skill they needed not just to be capable of winning a sparring match in the dojo, but to be able to be winners on the street where it
counts. He has modified the techniques of traditional shotokan karate so they can be applied on the street and has eliminated moves that are unnecessary in a real fight. In these Combat Shotokan DVD's Sensei Farkas teaches techniques that the simplest and most effective against all types of attacks.
This DVD teaches straight up self defense skills any and all can use to defend themselves in the street.