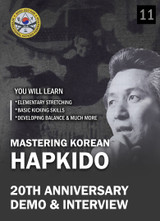 The last DVD in this series of 11 DVDs is called the 20th Anniversary Demo and Interview, and is not instructive for belt requirements like the other ten are. This DVD features a dynamic Hapkido demonstration from 1995, put together and presented by Bong Soo Han's students, in honor of his Santa Monica, California school's 20th anniversary. Grandmaster Han’s students present all of the exciting aspects of Korean Hapkido in a creative way. Also included is a very rare and exclusive interview with Grandmaster Bong Soo Han - the father of Hapkido.