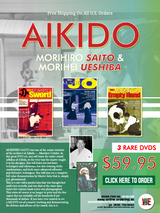 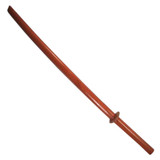 Morihiro Saito was one of the senior students of the architect of Aikido Moreihei Ueshiba. In this production you will learn the entire sword syllabus of Aikido the way the master taught it to his disciples. You will learn not just the basic techniques and take aways but also training drills combinations, offensive and defensive techniques You will also see a complete full color demonstration by Master Saito that is simply put phenomenal. He is also seen teaching a class of Aikido. This is one of those rare DVDs that was lost until recently and was shot at the same time his 5 volume book series was photographed. This series of course is no longer in print and the few copies that are available sell for hundreds if not thousands of dollars. If you have ever wanted to see a full dvd of a master teaching and demonstrating the defense and offense of the sword this is it. There is nothing better available . Most of this is in B/W and is very high quality and some of it is in full color. Key Words: Aikido, Ueshiba,Sword, Martial Arts Master Saito’s Jo techniques are considered the best of the best. In fact it is said that he obviously favored this weapon over most others because of its practicality. The Master not only teaches the basic simple techniques but he al;so will show you many advanced combinations and take aways that are unbelievable and his skill smoothness and skill level are top shelf. He also teaches the original version of Aikido’s Jo Kata teaching each of the 31 moves in three different directions so that you can see each and every nuisance of the moves. The Jo is such a versatile weapon only after watching a master like Master Saito perform the throws locks pins and much more can you appreciate its value. Many Police forces around the world have have employed the usage of this weapon especially for their mounted horse patrols. This DVD also has the master demonstrating and as well teaching a class of foreign students the usage of the jo and this is in full color while the first portion is in B/W and was shot at the same time as his 5 volume book set was photographed. Key Words: Aikido, Jo, Kobudo, weapons, kata, self defense, Smooth, smooth, smooth, is all one can say. Master Saito was one of Ueshiba’s original students and his skill is totally amazing. He is fast, he is filled with ki, and yes, he is very, very smooth, as you will surely see. He teaches basic techniques and advanced techniques in this production. He will demonstrate for you and you will be able to see him teaching a class of students some of the same techniques he demonstrates in the first portion of the production. You will learn many advanced combinations, as well as several reversals, and just so much more... only watching will make you a believer. This man is so filled with ki it simply oozes out of him in every move he does. You will see how he starts and ends a class the exact way he was taught by his master, the founder of Aikido Master Ueshiba. This production was shot at the same time as his 5 volume book set was photographed. This book set is no longer in print and, if you can find them, they sell for hundreds, if not thousands of dollars each. The entire production is as rare as can be. The first portion of it is in B/W and the last portion including a demonstration of Master Saito and as well him teaching a class is in full color. Both portions are very high quality. Key Words: Aikido, Self Defense, Japanese, Martial Arts

$74.95
In this first of 3 DVDs Master Sueyoshi teaches us the Art of Iaido, the art of "cutting unsheathing".Kamae, Kumidachi, basic combat techniques, special techniques and formality of rules. It is an...
Add to Basket
Add to Basket
Masters

$49.95
In Aikido there is only one founder and one person who started it all – that is Moreihei Ueshiba.  This double DVD set is dedicated to Master Ueshiba and is all about him.  He was so...
Add to Basket
Add to Basket
Masters

$74.95
In Japan, there are some great masters and then there are those who raise the bar several notches higher then the rest do. Master Saito has done that in this 3 DVD set on Aikido where he not only...
Add to Basket
Add to Basket