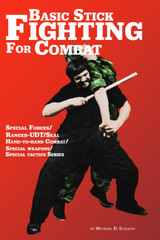 Michael D. Echanis was an American martial artist. He came from a military family, so it was no surprise that he enlisted early in his life to serve in the U.S. Army. After being injured while fighting in Vietnam, Echanis returned home and turned to studying Judo, Karate and Ninjutsu. In Basic Stick Fighting for Combat, his second book, Echanis explores Hwarangdo and its relationship to hand-to-hand combat. Throughout many clear, concise photographs, Echanis demonstrates his dynamic techniques, teaches the baton, the short stick, as well as the snapping short stick. Echanis taught courses to groups of Seals, spent some time traveling the U.S. engaging in fights with other martial artists, and was the editor of Soldier of Fortune magazine for two years. Echanis was killed in an aircraft accident at age twenty-seven.

Fighting Foundation of a Champion - Basics

$29.95
Kevin Brewerton World Champion several times over has finally released his own Fighting techniques for beginners.  This DVD will show you the basic techniques you need to master before moving on...
Add to Basket
Add to Basket

$29.95
Jeff Jeds, raised in a military family, started training as a student of the martial arts at the age of 8, when he took up both boxing and practical self-defense. Jeds continued with intensive...
Add to Basket
Add to Basket

$79.95
An outstanding 3 DVD set of DVD's that are aimed at the Beginner and will teach you all you need to get started on Knife Fighting Hand to Hand Combat and Stick Fighting. Jeff is one of the Young Guns...
Add to Basket
Add to Basket