What is the difference between Arnis, Kali and Eskrima? 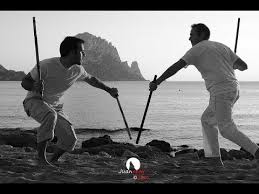 The Filipino Martial Arts (FMA),like other Martial Arts, is a tree with many branches. The terms Kali, Arnis and Escrima or Eskrima, have been confusing to some who wish to understand what the differences between these arts are.

The truth is is that they are all part of the FMA (Filipino Martial Arts). Escrima/ Eskrima, is from a Spanish term which means ‘fencing’. Its influence was more from the central part of the Philippines. Arnis, which is also a Spanish term actually was derived from the term ‘ Arnes de mano’ which translated to ‘ armour of the hands’ referring to the warrior’s ability to protect themselves with their weapon. It was later shortened to the term we now know it to be, ‘Arnis’. Arnis was known as the term used for this FMA in the northern parts of the Philippines. Kali is a Filipino term which was commonly known in the southern part of the Philippines and a common phrase used among Filipino Martial Arts. For the most part, these are all the same martial art. The masters of these arts influenced each other and thus there are many similarities. The differences usually depend on the instructor. 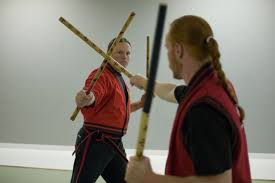 Some of the differences between them are execution of techniques, difference in stances, speed versus power techniques, light sticks versus heavier sticks, long sticks versus short sticks etc. There are more similarities than differences. All three train stick fighting, edged weapons defence, daggers and empty hand self defence techniques as well. Each have their pattern sets and each emphasize self defence techniques. No matter what name you choose to use to describe this Filipino Martial Art, one thing is for sure, its a mesmerizing martial art to watch, fun to learn and its practical applications for self defence are among some of the best in the weapon self defence.

Tracy Warrener has been fortunate to have been raised within the Martial Arts since the age of 4 years old and is a 4th Degree Black Belt in Goju Ryu Karate. She has had the opportunity to study with some amazing Martial Artists. Sensei Richard Kim, Sensei Peter Urban, Professor Don Jacob, Sensei Jim Wilson, Professor Wally Jay, just to name several. Of course her main Sensei is her father, Sensei Don Warrener. Throughout the 40 plus years of her involvement in the Martial Arts, she has worked her way from being a student of the martial arts to a Martial Arts Sensei ,teaching hundreds of students. She has ran and managed martial arts schools teaching students of all ages, worked within the community teaching at fitness centres, schools, businesses and Women’s Shelters, the benefits of Karate. One the causes close to her heart is teaching and empowering young girls and women the importance of self defence and awareness. Her program called Look Strong! Act Strong! Be Strong! focuses on easy self defence techniques and mind self defence techniques. In 2013 she was awarded The Silver Lifetime Achievement Award in the Masters of the Martial Arts Hall of Fame in California for her contribution to Women in the Martial Arts. She is also a Certified Reflexologist and Reiki Master. She has starred in three of her own DVDs produced by Rising Sun Productions on Reiki, Reflexology and her Look Strong ,Act Strong ,Be Strong Self Defence Program. tracy.warrenerentertainment@gmail.com