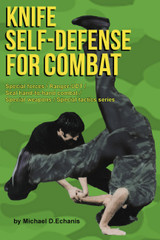 Knife Self Defense for Combat was the first book written by Michael D. Echanis. He was an enlisted soldier who served in Vietnam, and was the recipient of an award after continuing to fight after being severely injured. After his medical discharge, Echanis delved into the martial arts full time and was awarded a black sash in Hwarangdo. In this book he shares his extensive knowledge of knife self defense for combat, in clear, descriptive photographs. Echanis’ books have been described as exceeding any other close quarter combative manuals or books. There were to be nine books in total in this series, but unfortunately Echanis died at the age of twenty-seven.

$29.95
The well armed soldier is not more effective than a well prepared soldier.  Using this premise, Matser Isidro deals with an unresolved matter for professionals in the army - working with a...
Add to Basket
Add to Basket

$19.95
The well armed soldier is not more effective then a well prepared soldier. Using this premise, Matser Isidro deals with an unresolved matter for professionals in the armies working with combat knife...
Add to Basket
Add to Basket

$29.95
The Predator is out there! He's the one on the streets trying to take something from you — your money, your property, or maybe even your life. In this DVD, first in the powerful 2-DVD set,...
Add to Basket
Add to Basket

$29.95
The Predator is still out there! The first DVD volume in this set is remarkable, and this second volume may be even better.  Together, they are pure dynamite. When it comes to survival in the...
Add to Basket
Add to Basket