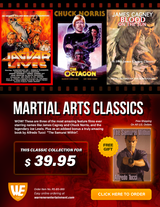 The Octagon is a 1980 action film starring Chuck Norris, Karen Carlson and Lee Van Cleef. It was directed by Eric Karson and written by Paul Aaron and Leigh Chapman. The film involves a martial artist (Chuck Norris) who must stop a group of terrorists trained in the ninja style by his half-brother (Tadashi Yamashita).

Blood on the Sun is a 1945 American war film directed by Frank Lloyd and starring James Cagney and Sylvia Sidney. The film is based on a fictional history behind the Tanaka Memorial document. The film won the Academy Award for Best Art Directio for a Black & White (Wiard Ihnen, A. Roland Fields) film in 1945.

$49.95
These two DVDs are a collection of footage received from several different collector's prize collections.  They include the best from Japan and Okinawa, plus the best of the American Martial...
Add to Basket
Add to Basket
Masters

$49.95
This is a compilation of the two best sellers and award winning DVDs recently released by BUDO Japanese Okinawan Masters and American Masters.  There are over eighty of Japan’s and...
Add to Basket
Add to Basket

$49.95
Charles Glass and Karl List are two of the best trainers in the world. Shot on location at Gold's Gym Venice beach california. These DVD's are for serious people wanting to train for real. 4 DVDs...
Add to Basket
Add to Basket

$64.95
A Special film collection to inspire everyone with stunning scenes of martial arts. 4 DVDs plus a unique Bruce Lee plaque.
Add to Basket
Add to Basket